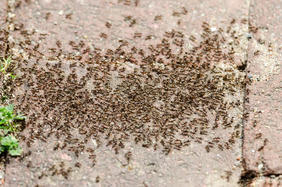 There are many species of ant in the UK and, in the main, do not come into contact with humans; in fact, we see ants in the garden and unless they are coming in to your home or business, they can be left alone. Related to the wasp and bee families, ants are classed as social insects as thy live in colonies.

The common ant in the UK are normally dark in colour. Some black ant females will have wings and you may notice swarming behaviour which is when males and females from the colony swarm above ground to mate. On returning to the underground colony, the males will soon die, with the mated female laying her eggs. Hibernating in winter to avoid the cold, a well-structured colony with a strong, queen ant will last many years.

In the majority of cases, ants of all species will build their nests or colonies underground although some will also utilise the rotting trunk of a tree, as well as hollow branches etc. they prefer dry earth, around the roots of a plant. This is why sometimes ants find the sand used in foundations of homes, patios and other structures a nice place to start building their nests.

Cavity walls can also make great places for ants’ nests and this is something that pest control technicians are finding is increasingly common. Workers in the colonies are always female, usually infertile, along with a smaller population of males, the queens and their larvae, known as grubs. An established colony can number thousands of ants and can, in some circumstances, be difficult to get rid of.

When they comes indoors… 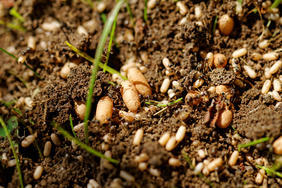 Worker ants are sent out continuously to forage for food to feed the queen and the grubs. Ants, to all intents and purposes, are resourceful insects and they have learnt that where there are humans, there is food. They are on the lookout, in particular, for sweet, sugary foods.

They can also find their way into unopened packaging and, once they have found a source, will alert other workers in the colony and they too will also join in and start to take this food back to the colony. These workers also release a hormone known as a pheromone; undetected by us, other ants will follow this aroma trail to find the food.

However, even though they can contaminate food, the organised and methodical way in which all ants seek and find food, as well as how they transport it back to the colony is to be admired…

Ants do eat all kinds of things, from seeds they find on the ground to other small insects and so they are not just searching for human food. They do not constitute a threat to humans, although they do go to dirty, contaminated places and so any food they have been crawling all over should be thrown away or composted.

Prevention is always better than cure 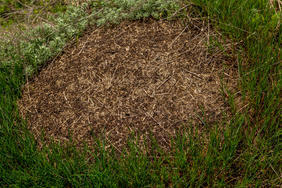 Preventing ants in the first place from entering the home is the best way forward, from ensuring that food is covered to looking for small cracks and crevices in door and window frames that can be filled, stopping the worker ants from finding a way in.

Getting rid of ants

Getting rid of ants is not difficult and something that Mr Pesty can do quickly and effectively. Why not call us and see how quickly we can get rid of ants?