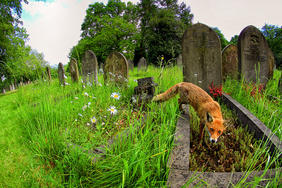 They can be a nuisance but there are measures that can be taken to deal with foxes, in both the town or city and the countryside.

Where do foxes live?

Normally, foxes would roam the countryside and local woodland but the rapid sprawl in the 20th century meant that we humans encroached on their space. Adaptable animals, they soon began to live alongside us in both a rural and urban setting.

Naturally living in burrows or dens, you can identify an active burrow and foxes are not tidy animals; around the entrance of the den will be discarded food and fairly large sized entrance, far bigger than one you would expect to see as a rabbit burrow. It will also smell unpleasant; foxes come with a musty smell that betrays their presence.

Foxes breed once a year in the warmer months of spring, however, their mating takes place in January and this is the dreadful noise that can be heard at night in some areas of Lincoln. The vixen has an eerie call that attracts the male foxes; in March, around 4 or 5 cubs will be born.

These cubs remain exclusively in the den until May, and from June onwards this den will be completely abandoned. In the warm summer months, the female fox will teach her cubs how to scavenge and hunt for food; in the countryside, this family unit will start to disperse in the later months of summer but urban foxes tend to stick together for longer, as a family unit.

People think that fox numbers are increasing but this is not the case; the fox population, experts suggest, is remaining stable probably helped by the ready food sources available in the city and towns across Lincoln and beyond.

Foxes are the natural predators of birds, rabbits and small animals, as well as eating insects, worms, fruits etc. urban foxes, however, have adapted to their surroundings and are known to scavenge for at least 50% of their food, if not more.

Is there a problem?

In the majority of cases, foxes do not cause problems. In fact, research has shown that the vast majority of town or city residents do not mind the presence of a fox, actively encouraging them in some cases with food and scraps.

However, some people do have more serious problems with foxes and active, preventative measures may need to be taken. Control of foxes can only be done using two legal methods – shooting and lethal injection, after trapping.

However, as a pest control company local to Lincoln, Mr Pesty will only use these in the extreme circumstances, as most fox problems can be prevented with a few minor changes in our behaviour and some prevention methods on the ground; call us to find out more!